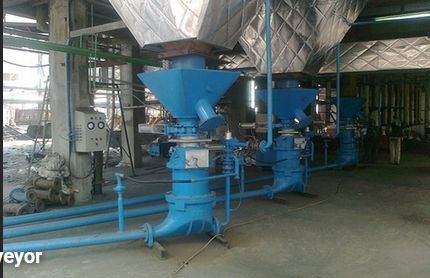 The pneumatic refuse conveying system is a type of waste disposal system that uses air to move refuse through pipes to collection points.Refuse is conveyed through steel pipes by a 20–25 meter per second air current to accomplish the goal.

Notable examples in Europe were implemented in the Stockholm area in Sweden and Legalese and Aldebaran in Spain. Another well known, yet rarely seen example is the one used in the utilidors in the Magic Kingdom theme park in Orlando, Florida.Products are moved through various tubes via air pressure, allowing for extra vertical versatility. Pneumatic conveyor are either carrier systems or dilute-phase systems carrier systems simply push items from one entry point to one exit point, such as the money-exchanging pneumatic tubes used at a bank drive-through window. Dilute-phase systems use push-pull pressure to guide materials through various entry and/or exit points. It is important to note that either air compressors, vacuums, or blowers can be used to generate the air flow. This will all depend on what the engineers think will be the most efficient and economical way of developing the system. Three basic systems that are used to generate high-velocity air stream.